Principally, a department store welcomes a large number of customer’s everyday, with an assortment of dreams decorating living, elegance and latest news. Takashimaya department store launched its business at the end of the Edo Period. It was 1933 when Takashimaya set up the store with air conditioners on all floors in Nihonbashi, Tokyo. The promotion catch copy at that time “hot site in Tokyo is just out from Takashimaya” caught the spirit of the generation. The name of the building at that time was Nippon Life Insurance Hall. Nippon Life Insurance Company built the building and Takashimaya rented it. Tokyo Office of the Nippon Life Insurance Company used some of the floors as an office. In the end, the company left the building in 1963. From the postwar years of recovery to the high economic growth period, the building floor space was repeatedly increased and reconstructed. By 1965, it had grown to a size occupying one block in the town. In 2009, the building of Takashimaya Tokyo was designated as an important cultural property and was the first department store building recognized. It is one of the largest department store buildings still existing and has been in business since the early Showa period. The interior and exterior are well maintained and present a lasting reflection of the Showa Period.

The grace of the architecture can be seen reflecting the glory and elegance of the Showa period.

For building Takashimaya Tokyo, the concept by Teitaro Takahashi was adopted, he received first prize in the design drawing competition that met the requirements of “a modern style building reflecting an oriental taste.” Japanese designs can be seen complementing the solid western historical style in many places. Later, floors were added by Togo Murano who continued the design of Mr. Takahashi and also incorporated a great deal of modern architecture. Since the completion of the structure in 1933, floors were added over the next 30 years. This masterpiece of Showa architecture still depicts the brilliant concept of those times.

The space is symbolic of the affluence of urban culture.

The vaulted area is situated at the entrance facing Chuo-dori Street in which marble columns are in line, from the first to second floors. The chandelier still sparkles gorgeously, as it was during its initial installation, even though the original metal was removed to support the war effort. This existing chandelier was designed by Togo Murano. The Takashimaya building provides affluent space for people to share enjoyment with their family and close friends in restaurants or during organized events, as well as for just shopping. The rooftop exclusive to the department store provides a place of recreation or for relaxation and is considered as an oasis in this urban area.

Takashimaya Tokyo will continue to evolve well into the future.

Elevators are still manually operated by attendants. This service is one of features of Takashimaya Tokyo, unchanging since establishment. In 2004, earthquake resistant reinforcing work was completed, complying with the Earthquake Resistance Facilitation Law. Takashimaya paid special attention to prevent damage to the unique external appearance of the building and the internal décor, although ensuring full functionality with the modifications. The building of Takashimaya Tokyo is assessed as a masterpiece for floor additions and architecture so that it has now been designated as an important cultural property. We will continue to strive for the development of the department store that is loved by all people as a landmark in the Nihonbashi area. 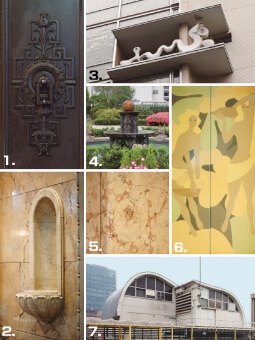 (1)Iron door of the front exit: A massive iron door, depicting a motif in harmony of Japanese and western style design.

(3)Statue on the balcony on the 5th floor in the south section: A piece of work by a pioneer of outdoor sculpture Norio Kasaoki

(6)Door of the 13th elevator on the first floor: Designed by a Western-style artist Togo Seiji

(7)Rooftop tower: The beautiful dome shaped roof was designed for a baby elephant “Takako” that was kept on the rooftop for 4 years from 1950 and was very popular with children.